It sifts from Leaden Sieves –

It powders all the Wood.

It fills with Alabaster Wool

The Wrinkles of the Road –

It makes an even Face

Of Mountain, and of Plain –

Unbroken Forehead from the East

Unto the East again –

It reaches to the Fence –

It wraps it Rail by Rail

Till it is lost in Fleeces –

Acres of Joints, where Harvests were,

Recordless, but for them –

It Ruffles Wrists of Posts

As Ankles of a Queen –

Denying they have been –

Solaris will be premiering the composition based on this poem, that tenor member David J. Tetreault has written especially for our ensemble! DJ is currently pursuing his MFA in Music Composition at Vermont College of Fine Arts in Montpelier. We are very pleased to be the ones to sing this piece in its first, but surely not its last, performance! DJ was struck with the wonderful imagery in the poem, and has set it beautifully. We will perform it in our Holiday Lights concerts! (see “Concerts & Events”)

Once a year, we do a photo shoot. This year was in September, in Jericho. While there, we visited Pat & Beth O’Connor’s backyard, which just happens to be the home of “Little Fenway,” “Little Wrigley Field,” and “Little Field of Dreams.” The O’Connors built these 1/4 size, exact replicas of the 3 ball fields, and hold whiffle ball tournaments there, which to date have raised $4 million for charity! (click on the images to see larger version)

Robert DeCormier, beloved friend, mentor, teacher, conductor, champion of peace and justice – with whom Dr. Willis and many singers in our ensemble had a special relationship – passed away November 7, 2017.  Dr. Willis served as assistant to him during part of his time with the Vermont Symphony Orchestra Chorus, and almost half of Solaris members had an association with him as singers under his baton in that chorus and other choral projects. His kindness, humanity, passion for music, and love touched each of deeply, and yet we are only a tiny percentage of the hundreds and hundreds of people he has touched through music. His legacy will go on and on through his marvelous arrangements of American music – spirituals, folk songs, carols, original compositions, and other world music. We will honor him again and again through his music for years to come, and know he will be smiling upon us as we do so. Thank you Robert, for so many wonderful musical memories. All of Solaris sends our condolences and love to his family at this sad time.

Thanks for the Invitation!

Dr. Willis and the Solaris singers thank the Greater Burlington Multicultural Resource Center and Patrick Brown, its Director, for having invited us to perform last Saturday, November 4th for “A Night at the Opera.” It was a pleasure to hear the wonderful soloists and to perform for the appreciative audience.

Solaris Sings in “Night at the Opera”

The Greater Burlington Multicultural Resource Center is sponsoring a benefit concert “A Night at the Opera” to raise funds for the annual Burlington Dr. Martin Luther King, Jr, Remembrance and to support Caribbean Hurricane Relief Initiatives. Classical Musicians   will be performing works by Mozart, Verdi, Mascagni and Massenet. David Neiweem will play the Grand March from Aida on the Organ, Solaris Vocal Ensemble will perform the famous Va pensiero (the Slave Chorus) from Nabucco.  Soloists Sarah Cullins, Juliana Krajcovic, Keaun Guy and Hyung Song will perform operatic arias and Julia Deziel will play the Meditation (Violin Solo) from Thais.

Invitation to Support Us

Solaris is celebrating our Fifth Anniversary this season and we have extraordinary performances planned for you! This would not be possible without your faithful support and continued presence with us during this very special musical journey.

New this season – Solaris has added a third December concert!  Our festive trio of Holiday Lights concerts in  December will feature works by Saint Michael’s College professor emeritus, Richard Stoehr (1874-1967), a prolific and highly-respected Austrian composer, who began his teaching career at the prestigious Academy of Music in Vienna.  Fleeing the Nazis, he came to the US and accepted a teaching position at the renowned Curtis Institute. When the Institute was forced to let some faculty members go due to the reduced number of male students during the war years, Richard Stoehr accepted a position teaching German and Music at Saint Michael’s College in Colchester.  Solaris will perform his setting of the timeless Ave Maria text and A Grace for Christmas.

In February we are delighted to present our annual This Shining Night benefit concert in support of the Burlington-based non-profit organization, STEPS to End Domestic Violence. Also in February Solaris will be joined by our friends from the Counterpoint Chorus and the Bella Voce Women’s Chorus to present a joint program of Richard Stoehr’s profound but under-performed choral works.

Finally, to cap off this amazing Fifth Anniversary celebration, Solaris will present Carl Orff’s exciting and popular work Carmina Burana. The powerful vocal score includes robust and evocative music for the full chorus and deeply moving and dramatic music for soprano, tenor, and baritone soloists. The instrumental forces for this major work will be pianists performing on two pianos and an extensive percussion section led by UVM Professor and Vermont Symphony Orchestra Principal Percussionist Thomas Toner. Plan to buy your tickets early through our website for our single performance of Carmina Burana in April.

Please be sure to mark your calendar for these exciting Solaris 2017-18 season performances. You can stay up-to-date with Solaris by following us on Facebook or at our website www.SolarisEnsemble.org where you can also subscribe to our email communication.

As we prepare for this remarkable anniversary season, on behalf of Solaris, I wish again to thank you for your ongoing support of the musical arts and hope you will continue to support us in this coming year. Solaris’ commitment to bring light and meaning to great choral works would not be possible without you.  Donations received by November 17 will be included in the donor listing in our fall and spring concert programs.

I look forward to seeing you during this special anniversary year and again, my sincere gratitude for your generosity. 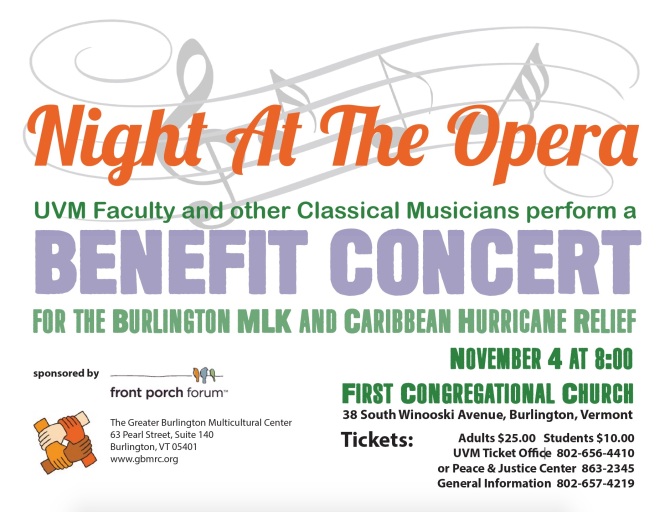 More Info: Night at the Opera

Solaris Vocal Ensemble is excited to celebrate our Fifth Anniversary Season, 2017-2018. Please come celebrate with us at this year’s concerts! From our annual Holiday and Spring concerts, to our This Shining Night benefit concerts, to touring in Montreal and Maine, performances at the Statehouse in Vermont’s capitol, in Burlington’s annual Peace Concert, at the Lake Monsters’ baseball games, and everything else in between, we have continued to grow as an ensemble and an organization, and we want to celebrate that with our audiences. Happy Solaris Anniversary to all of us!