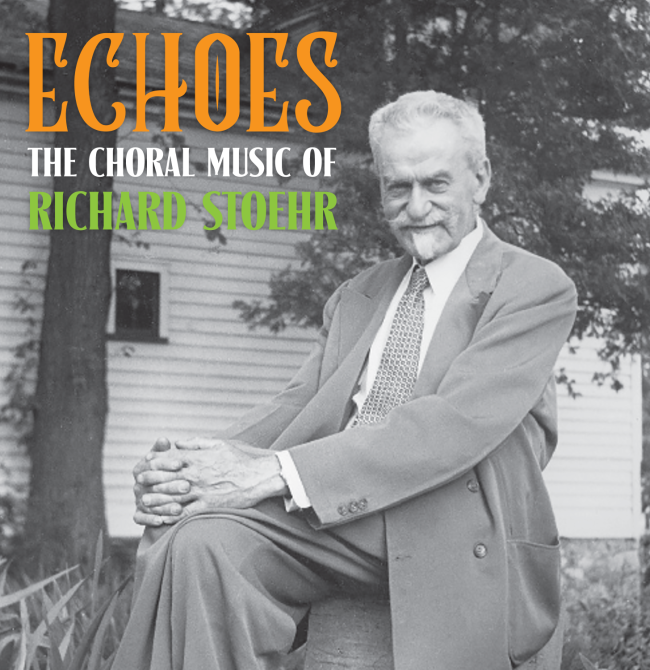 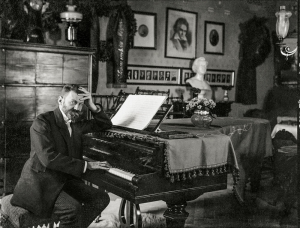 Richard Stoehr at the piano in his Vienna apartment in 1925. 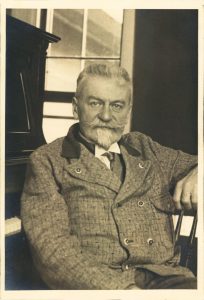 Richard Stoehr in his room in Saint Michael’s College’s Prevel Hall in 1942.

Vermont was home to its own Post-Romantic Viennese composer for more than 25 years, yet his work is only beginning to be known here. Richard Stoehr, teacher of the likes of Samuel Barber, Rudolf Serkin and Leonard Bernstein, taught at Saint Michael’s College 1941-50 and spent the remainder of his life in the Green Mountain State – where his daughter Hedi Stohr Ballantyne lived with her family.

Stoehr was born in the same year as 12-tone composer Arnold Schoenberg, yet clung to the tonal traditions of the 19th century. Nowhere can this be heard better than in the 1942 “Crossing the Bar,” Op. 83, No. 1, his setting of the Alfred Tennyson poem for four-part chorus and piano.

The nearly six-minute work achieves the rich sound of the Romantic era without sounding at all derivative. He creates a deep richness in both the vocal parts and the virtuosic piano. Claire Hungerford delivers the hauntingly lyrical soprano solo while. The combined choruses bring out the work’s grandeur without losing clarity. (Except for vocal soloists, personnel aren’t identified on the CD for the individual selections.)

Stoehr (1874-1967) was born in Vienna where he studied at the Vienna Conservatory, becoming a professor there 1903-38. His students there included conductors Herbert von Karajan and Erich Leinsdorf, and film star Marlene Deitrich. Although Stoehr had converted to Christianity, he was fired for his Jewish heritage in 1938.

Arriving in the United States in 1939, Stoehr taught at Philadelphia’s Curtis Institute of Music (where his students included Bernstein) until he was included in 1941 layoffs due to World War II. Through friends he found work at Saint Mike’s teaching music and German until 1950, remaining on as emeritus until 1960. He died in Montpelier.

Stoehr composed some 141 works, among them seven symphonies, two operas and 27 choral works. He wrote roughly half while living in Vermont.

His “Ave Maria” for the new Saint Mike’s men’s glee club in 1954 was one of Stoehr’s last works. In this recording, the men, accompanied on organ, deliver the purity and reverence this early 20th-century sounding work deserves. The tenor solo is richly sung by Adam Hall.

Also composed in 1954, “A Grace for Christmas” (1954), for four-part chorus and piano and in English, begins simply as a hymn and morphs into a contemporary chorus, adding complexity to achieving grandness. Other composers have attempted this in creating carols but ended up with schlock. Stoehr reined it in just the right amount.

Two songs, both in German and likely written in 1919, reflect the end of World War I. Still, “Armseelchen (Poor Little Soul),” Op. 39, No. 1 is a dark little funeral tale, jaunty and spicy, more of a witty march than a dirge. Colleen Flynn Campbell delivered the brilliant soprano solo.

In “Schneeflocken (Snowflakes),” the women alone sing of “How it flurries and blows outside …” It’s quietly driving, contrapuntal, with gentle dissonance. A women’s solo duet adds to the tenderness.

Stoehr’s music can sound almost derivative, but attentive listening reveals its originality. This is definitely true in the case in the 1903 a cappella Three Psalm Motets, sung in German, which at first sound centuries older.

Psalm 62, with its rich but gentle counterpoint, begins like a chorale and morphs into a chorus. Strong but consonant harmonies fill the declamatory Psalm 67, which even boasts a fugue. Psalm 24 is more of a lyrical chorus and has its own fugue.

The performances, as with the others on this album, blend the voices with a focus on beautiful sound. They are balanced and naturally phrased. Although more gentle than dramatic, these readings are anything but static. In fact, they are deeply affecting.

The performances are gentle yet incisive. The women achieve a warm and sensual blend, all the time maintaining intimacy.