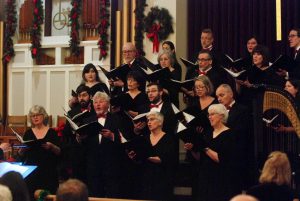 WATERBURY – It’s the season of choral singing, and one group certainly shone Friday at the Congregational Church, also called he White Meeting House. The Burlington-based Solaris Vocal Ensemble proved its mettle as among the best in the state.

Dawn Willis directed the 23-voice choir in its annual holiday program, “Sing We Now of Christmas!” scheduled also for Charlotte and Burlington. Most was traditional holiday fare, albeit in some spectacular arrangements. But there also was some particularly unusual and rewarding music, as well.

Musically most rewarding was the music of Felix Mendelssohn, three parts of the composer’s unfinished oratorio, “Christus,” Op. 97. Three choruses with ensemble members as soloists illustrated just how magnificent this music was, coming from a devout Lutheran.

More than that, these three choruses and solos showcased Solaris as the fine ensemble it is. It was clear that individually the voices were attractive and used with skill, but under Willis, they nearly always blended beautifully. More importantly, Willis guided them through the music compellingly. With Susan Summerfield, performing the orchestra’s role on organ, it was high-end music making.

Willis is one of Vermont’s foremost choral conductors, having served as assistant director of the Vermont Symphony Orchestra Chorus during its Robert De Cormier heyday, as well as founding and directing Bella Voce Women’s Chorus and Solaris. More than Willis’ ability to bring together the 23 voices as an orchestra, it was her musical depth and understanding that made Friday’s performance compelling.

Another great work was the Gloria from Dominick Argento’s “The Masque of Angels.” The traditional Latin Mass text is given real drama with Argento’s striking rhythm and harmonic language. Although Solaris had a tendency to “round out the edges” rather than embrace them, with excellent piano by Evan Allen, this was a moving and arresting experience.

Perhaps the most beautiful moment was “Stopping by Woods on a Snowy Evening” from Randall Thompson’s “Frostiana.” The men of Solaris achieved the gentle and intimate lyricism of this setting of the Robert Frost poem. It was a gorgeous performance of a masterpiece.

A particular treat was the solo playing by harpist Rebecca Kauffman, one of the accompanying musicians. Among the three arrangements by legendary harpist Carlos Salzedo, perhaps the most compelling was the complex and imaginative Paraphrase on “Away in a Manger” (to the tune of “Flow Gently, Sweet Afton”). Kauffman played with a natural flow and virtuosity, bringing out the appropriate melodies within a rich structure, as well as a deep musicality. It was irresistible.

With Solaris, Willis has attracted a fine array of voices and formed them into an excellent vocal ensemble that delivers compelling musical performances. This concert proves the Solaris’ capabilities extend well beyond holiday fare. I look forward to future concerts.