Watch a video of the concert 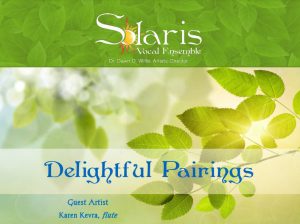 The Solaris Vocal Ensemble has long been considered one of Vermont’s finest choirs, but its latest program, which debuted Friday at the Waterbury Congregational Church, sponsored by Capital City Concerts, featured some truly penetrating offerings.

With “Delightful Pairings,” conducted by founder Dawn Willis, vocal works were paired often to advantage, some not. But throughout, the 20 disciplined voices not only sang with accuracy, beauty and warmth, they delivered some very special music. And complementing the vocal sound in three songs was flutist Karen Kevra, who also played three most compelling solo works. The program was repeated in St. Albans and Burlington.

The real masterpiece of the evening was “Hymne au Soleil (Hymn to the Sun)” by Lili Boulanger (1893-1918), perhaps the greatest woman composer since Hildegard of Bingen (1098-1179). This superficially simple song was rich with complex modern tonal language that gave it a unique haunting joy. Willis and her able singers delivered this gorgeous music with heart.

It could easily have been a disaster for its pairing, the world premiere of “The Brain Is Wider than the Sky,” based on the Emily Dickinson Poem, by James Stewart, VPR Classical Host and Solaris member. But it wasn’t. Stewart’s song was mellow but striking, and truly beautiful. Although it could have used the power of a bit more interesting harmonic language, it wasn’t a disappointment after the Boulanger.

The other real masterpiece on the program only involved one person. Claude Debussy’s 1913 “Syrinx” for solo flute was written as incidental music for a play, however it has become a significant part of the flute repertoire. Kevra delivered a performance that was very personal and deeply penetrating. It was gorgeous.

Kevra, founder and artistic director of Capital City Concerts, performed two other solo flute works, including the charming but inconsequential “The Children Are Playing” by Carl Nielsen. However, Kevra made good sense of Edgar Varese’ “Density 21.5” (the density of platinum), a knotty piece that still challenges the listener as well as the flutist, despite being written in 1936 (revised in 1946). Kevra delivered an impressive performance.

The other truly striking pairing brought together Johannes Brahms and American composer Samuel Barber. “O Schöne Nacht (Oh Lovely Night!) was lyrically luscious as only Brahms can be, thanks in part to the excellent piano of Melissa Ewell. “Sure on This Shining Night,” with Barber’s subtle but spicy harmonic language, was pure joy. Also pure joy was the late Vermont choral director Robert De Cormier’s arrangement of the spiritual “Let Me Fly.” Willis paired that with the contrapuntal “Vivat Musica” by contemporary Czech composer Jií Laburda for a spirited opening of the program.

Also notable were two spirituals in unusually sweet arrangements: “Give Me Jesus” by Larry L. Fleming and “Deep River” by Moses Hogan. Barber’s “The Coolin’” was paired with the charming “O My Luve’s Like A red, Red Rose” by René Clausen, joined by Kevta and cellist Steve Olson.

Again, Solaris proved itself a fine choir, but this time in substantial music by Brahms, Boulanger and Barber. Why not a little more.